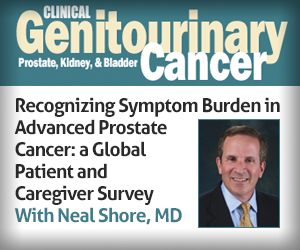 As posted on October 5th by www.clinical-genitourinary-cancer.com. With Dr. Neal Shore.

Prostate cancer is the second most common malignancy in men worldwide, with an estimated 1.1 million men across the world diagnosed in 2012, and the fifth leading cause of cancer-related death in men, with 307,000 deaths reported worldwide in 2012.1 Prostate cancer is an androgen-dependent disease that initially responds to androgen-deprivation therapy (ie, chemical or surgical castration). However, most men will become resistant to androgen deprivation therapy over time, developing nonmetastatic castration-resistant prostate cancer (CRPC), in which a rise in prostate-specific antigen is often the first detectable sign.2, 3, 4 For some men, nonmetastatic CRPC will progress to metastatic CRPC, which is still uniformly incurable, although several new treatment options have been shown to significantly improve survival, including traditional taxane chemotherapy (docetaxel), new androgen receptor pathway antagonists (enzalutamide, abiraterone), novel taxanes (cabazitaxel), immunotherapy (sipuleucel-T), and targeted alpha therapy (radium-223).5, 6

To better understand the symptoms associated with advanced prostate cancer (aPC) and the impact of symptoms on the lives of patients and their caregivers, an international survey was commissioned by the International Prostate Cancer Coalition. The goals of the survey were to describe the disease burden, highlight barriers that prevent men from discussing symptoms, explore the patient-caregiver dynamic, and raise awareness of the importance of discussing symptoms with healthcare providers.