Blog - Latest News
You are here: Home1 / In The News2 / Uncategorized3 / Navigating the Adverse Effects of ADT. With Dr. Neal Shore 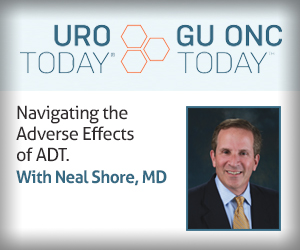 to watch the video.

Dr. Neal Shore addresses both the perception and evidence of side effect for patients on androgen deprivation therapy (ADT). There is a growing concern about ADT side effects now that it is being used more in non-metastatic prostate cancer, which is exposing men to ADT for longer periods of time. Several common adverse effects are known about ADT impacting multiple organ systems including the central nervous system, as well as the hematologic, reproductive, musculoskeletal and endocrine systems. Researchers are also now taking a closer look at the link between ADT and cognitive impairment, particularly dementia. Dr. Shore also discusses studies examining ADT’s effect on the metabolic and cardiovascular function of prostate cancer patients.

The Future of Targeted Alpha Therapy. By Dr. Neal Shore
Scroll to top